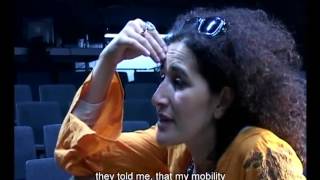 Identity in the process of change is the central theme of the film. When reality changes – the contemporary artist is often the first one to register the development. Often artists sense the change even before it materializes and sometimes they have direct impact on the way we reshape our reality.

This process makes the artist play an important role in society; therefore, contemporary artists play a key-role on the Images from of the Middle East.

To be able to understand the works of an artist to the full extend, it is important to get insight into the context, in which the artist is performing. Through images of the artist, his/her movements, and thoughts in his/her environment, the audience will get a multi faceted understanding of the art pieces they are exposed to. At the same time the artworks and the artist behind it reflects the contemporary Middle East and its relation to the rest of the world.

I have worked on short profiles, where I follow Arab Artists during their participation in an Art Festival in Copenhagen (Images of the Middle East Festival, August 2006). In order to examine their state, I have boldly asked them to show me there identity cards and passports as if they are under pressure in one of the world’s airports. The outcome is a 28 min film where the personal intersect directly with the political and the artistic, featuring the following artists:

and The Danish Center for Culture & Development